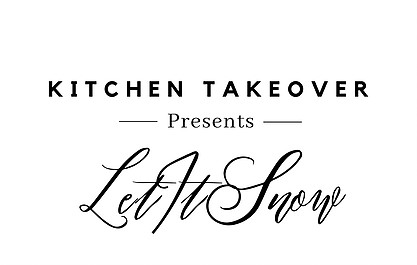 At Christmas play and make good cheer, For Christmas comes but once a year.”

Snap out of the Christmas cliches fellow foodies! You’ve been caught up in that dry turkey, soggy trifle, fake fruit cake carry on for far too long. It’s time to throw off the tinsel and embrace the divine.

After all, Christmas is a celebration of peace on earth, so why not experience a delicious portion of something truly holy?

Kitchen Takeover, Let It Snow edition, upends yuletide with a December pop-up degustation feast of next-level foodie festivity. Wrapped up by international chef Shane Yardley, every course will be a heavenly reinvention of traditional Chrissy fare with meat, fish and all the trappings in between. Think sous vide turkey and liquid nitrogen Christmas pudding. We will also be offering a plant based alternative menu which will be equally as yum.

Revolutionise your Christmas dinner in the company of friends and family, or transform the Christmas work do into something sublime. Join us at location as secret as Santa’s Grotto for Kitchen Takeover, the Christmas Edition on 6, 7, 13 & 14  December.

Ready for a bite?

Our event sold out faster than you could down a Snowball. Remember to sign up to the waitlist in case Santa comes early.

Who is it for?

Wild at heart foodies on the hunt for a ‘big city’ style food adventure. Think the intimacy of an East London supper club mixed with the gastronomy of a top Melbourne laneway eatery and the creativity of a Copenhagen restaurant.

Masterchef judge and ex head chef of Euro Shane Yardley will be cooking up a seven course extravaganza. Trained by the godfather of French cooking, Alain Ducasse, he will combine his incredible training with new ingredients, techniques and tastes. Think Christmas dinner, disrupted.

A location as Santa’s grotto in Tauranga. Brave foodies get a text one hour before. Go on, take a walk on the wild side.

Why should I leave the comfort of my elf-themed duvet?

Following on from three sell-out events, the Mount’s revolving restaurant is back for the Christmas edition. Guests will be transported to a white winter wonderland to devour a six course degustation dinner at a secret location. If you love the element of surprise, appreciate fine dining and want to break out of the standard Christmas dinner do then this event is for you.

How do I get tickets?

What Will you eat?

Our Christmas theme means your plate will be a celebration of traditional Christmas fare but with bold additions, unique twists and unconventional mash ups (and that’s not just the potatoes!). We are also offering up a plant based option alongside our regular menu so you forward thinking foodies feel left out. If this isn’t for you, sign up to our newsletter to find out when we launch our 2020 Kitchen Takeover events.

Shane Yardley is a chef with platefuls of experience. Having spent the first part of his career training in some of the world’s most renowned restaurants including the Sanderson and Bistro Largo, he did a long stint as Simon Gault’s right hand man. He has now returned to the fold as a tutor at Toi Ohomai teaching the next generation how to cook like a pro. Career highlights include Head Chef of Euro, Fish and a guest judge on Masterchef. You’re in for a treat.

How does it work?

The set menu will be announced when you arrive and guests will be seated on a long table so you get to share your Christmas event with your pals and meet like-minded foodies.

If you can’t make the dates for the Let It Snow pop-up, sign up to our newsletter to be the first to know when we release tickets for our Hunter Gatherer edition in the summer 2020.