A Dining Adventure Of 1.6 Million Years

It was 5pm when I got the email informing me of my secret location for the evening. Two hours later, I found myself walking down an indiscreet lane with glowing lanterns to mark the path, the only indication I was in the right place.

As I happened upon a small Hobbit-like wooden door adorned with antlers, I was greeted by an exuberant host in a velvet jumpsuit. No, I wasn’t dreaming…. I was just about to enter the Mount’s secret pop up restaurant. Kitchen Takeover: The Hunter Gatherer Edition.

The venue for the night was Central Deli but unlike I had experienced it before. The café was transformed by leaves, lights and carved wooden placemats into an elegant dinner party in the wild. The brain child of Stacey Jones, Kitchen Takeover is a supper club featuring a revolving line-up of home cooks and professional chefs. “The only guarantees,” Stacey says, “are a good time, envelope-pushing food and a completely different experience each time we pop up.”

If – like me – you’re thinking that this is an exclusively Millennial event, think again! The crowd was a complete mix; a variety of ages and nationalities, genders and groups, this unique event brought diverse corners of the community together. Mother-daughter dates, girls’ night out and couples young and old filled the room and headed to the bar for a Blank Canvas wine or a Slab Brewery beer.

Attending on the final night, Kitchen Takeover’s total social media ban worked – we had absolutely no idea what to expect out of the Hunter Gatherer theme. Was this dressed up paleo? Would we be eating with our hands? Cooking over an open fire? The possibilities were endless…and then the food arrived.

Canapés and desserts are what I live for and Kitchen Takeover’s chef for the evening, Shane Yardley, did not disappoint. Shane – a local who worked for many years as Simon Gault’s right-hand man before returning to Tauranga – sent our taste buds into a frenzy with smoked marlin pate and tuatua fritters, porae ceviche spearfished off the coast of Mayor Island and quail eggs cooked to perfection.

As we relaxed into the evening and became acquainted with our fellow diners, the fantastic flavour and unusual combinations just kept on coming. Over the course of the evening, we had dish after delectable dish all centred around ingredients that were locally hunted, fished or gathered, from wild venison to record-breaking smoked marlin to edible weeds.

Attention was paid to every single element on the plate, like the crispy kahawai fish skins (they tasted a bit like pork crackling) served alongside that same freshly caught fish’s thinly sliced flesh. The Manuka whipped butter was double smoked – first in a smoker and then again when served under a cloche filled with smoke from a smoking gun; the dukkah foraged and fragrant; the kawakawa ice cream subtle and refreshing, but the most memorable moment was the eye-poppingly ingenious palate cleanser.

Garden weeds like borage, chickweed and speedwell were pureed with Granny Smith apples and treated with liquid nitrogen to become steaming ice blocks. There was a mad rush to pop them in our mouths where they turned to dust, leaving our palate cleansed and our minds blown.

With the calibre and creativity of the food, I’d say it felt like we were dining at a top shelf restaurant in London or New York – except this isn’t true. At five-star restaurants, you don’t make friends with other guests. You don’t have the host come around and tell to you about each dish’s origin story. You don’t learn about unique local businesses like Julia’s Edible Weeds. Kitchen Takeover is more than just a restaurant – it is the cultural experience of a big city merged with the close-knit community spirit that makes the Mount so special. 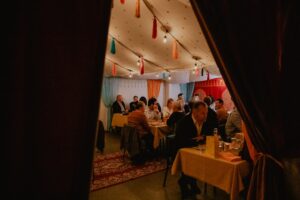 East of the Middle: Putting the flavours of Arabia on your plate 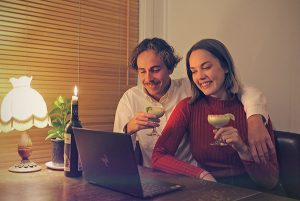 Dining In Is The New Dining Out: How To Host A Virtual Dinner Party